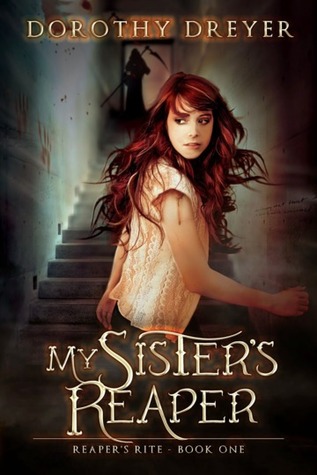 Zadie’s sister Mara was hit by a bus and is in a coma, and Zadie is feeling guilty about chasing a boy, Gavin, while her sister is on the brink of death. Zadie’s guilt isn’t misplaced because she has magic powers, and she thinks she might be able to bring her sister back to life. The novel starts slow and gains traction, and the initial focus is on Zadie and her BFF, Naomi, who are both obsessed with getting a double date with the afore mentioned Gavin and his cute friend, Danny. But this story builds from Sweet Valley High to haunted house, and that’s where its strength is.

The action is more ghost story than slasher flick, which works well for the nebulous mythology woven around Vila and Reapers. The magic in this book works best when it’s left vague, and it feels like a cope out when the ‘control the four elements’ plot is added; that aspect of Zadie’s training feels like filler for something that should’ve been more interesting. The heist plot was also the most underwhelming heist scene I’ve ever read, too, and additionally felt like filler.

The highschool humor felt real, and this serves to elevate the characters above the difficult plot moments. I could see some of my high school friends reacting the way the characters did to many of the circumstances in the novel (even when the events themselves feel bland, the characters don’t). Zadie and Naomi have the most developed relationship in the novel, and I genuinely liked Naomi; Zadie’s character suffers a bit from having to shoulder the emotion burdens of the story, but I bet she’d be more fun in happier circumstances. Mara isn’t very well fleshed out (there’s a good reason for it), but I never got a solid idea of what Zadie and Mara’s relationship had previously been like before the accident. Zadie and Naomi felt more like sisters than Zadie and Mara did. It took longer for Gavin and Chase to feel real to me, but their characters get there.

The high school tropes abounded in this novel, too, and they worked for the sweet romance that developed between Gavin and Zadie; it’s a genuinely cute romance with all the hallmarks of first love done in a non-cliché way. However, I’m a little weary of the popular, alpha bitch character being used as the stock bad guy in every novel featuring a nerdy, plain girl as the protagonist. It just feels lazy to me, but maybe that experience of thinking of all popular/pretty girls as Plastics is something I never experienced so it doesn’t resonate with me. I understand that teens can be terrible to each other, but some of that bled into lazy characterization.

Dreyer’s writing voice is completely comfortable linking together the disparate parts of this novel, and that’s what ultimately saves it. The dialogue is sharp and authentic, and Zadie’s experience really captures the turmoil of juggling high school stress, relationships, and taking on a bigger role in life.

Read if: You want a paranormal book that feels more like a ghost story that turns ordinary events like taking a bath, going to a slumber party, or building a float into a supernatural occurrence. If you’re sick of vampires, werewolves, demons, or other supernatural creatures, this could be the paranormal book for you.

Beware if: You want a mystery. There is no mystery to this plot, and I kept expecting one, but what you see is what you get in this novel.

Rating: 3 stars — loved the writing style, but didn’t connect with some of the characters and didn’t enjoy parts of the plot