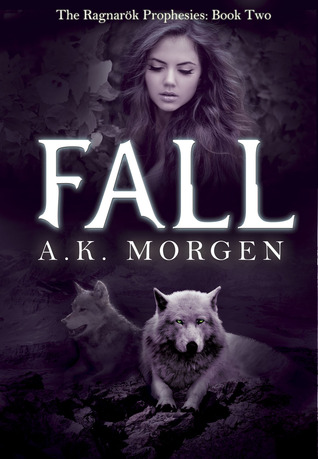 Fall picks up about a month after Fade ends, and Arionna is recovering in the hospital from Skröll and Hati’s attack. Arionna is now plagued by nightmares of Fenrir and the twin demon wolves; she’s also starting to understand the darker side of Dace’s nature. Dace is willing to sacrifice anything and everyone to keep her from being attacked again, and Arionna fears this is going to turn him into a literal monster, so she leaves Bebee to go in search of answers to stop the apocalypse.

The story starts out stronger than Fade does, and there’s an urgency to Arionna’s problems in this book that there wasn’t in the first one. Her relationship to Dace is sorely tested, too, and there are good moments where Dace gives off the vibe that he could potentially become abusive. Arionna is smart enough to realize that, if she doesn’t figure this thing out for herself, Dace’s need to protect her is going to lead him to further manipulate her, controlling every aspect of her life. This is a challenge most heroines with alpha male boyfriends face, and Arionna is wise enough to know what the starter kit for an abusive relationship looks like; in a nice twist, she leaves Dace instead of him fleeing to protect her from himself.

The other characters that benefit from spending more time with them in the sequel are Chelle, who I didn’t have much of a sense of as an individual before, and Ronan, who was the surprise not-an-actual-bad-guy in Fade. The story also nicely sidesteps conflicts with love triangles by having Arionna struggle with herself and Dace, which eliminates the need to use Ronan as a love interest. If you want relationship conflict, a brooding bad boy, but hate love triangles, this sequel is going to make you very happy. I found myself liking Ronan, but I’m a corvid/avian fan, so that’s not a hard sell. Not going to lie, I hope the sequel includes the potential of a new love interest for Ronan because I appreciate romances where the characters come into it with a lot of baggage and no illusions about True Love, only with the feeling that they need each other or are better together than apart. Ronan could benefit from this, but I’m not sure he’ll get it. Arionna and Dace’s relationship is more of the cosmic love variety, and the story does a good job at layering it with conflict despite this fact.

My big time beef with this book is, while I enjoyed the characters a lot more, the ending left the story feeling incomplete, but not in a good way. This book is trying to set up for the big conclusion, but ends up offering very few climactic moments or pay offs of its own, and I went into the ending prepared for a big twist and a surprise via the big mythology mysteries the story teases. There is plenty of new mythology layered into the story, and Fade used its mythology to create a surprising yet satisfying ending, but Fall, well, falls flat on that front. I expected either the visit to the professor or the interrogation of the flower shop lady (it makes sense in story) to result in a major twist or two, but they turned into more frustrating dead ends. The climactic ending happens off page, and it suffers from the fact that, because some of these characters are literal wolves, they don’t always have the same emotional impact as the human characters. There was a moment when I thought something happened to Chelle, and I thought that might be the real twist at the end, but it wasn’t. Instead, Mandy, a character who’s been mostly in the background, goes missing, but this fails to resonate. The big ending moment of the novel could’ve still happened (it’s teased throughout the story and isn’t terribly surprising), but there needed to be something more, action wise, to this ending. This ending is an example of how to write a strong story, deepen the mythology for the final sequel act, but then fail to actually build on anything at the end of this story itself; this wouldn’t be the first second act book to fall flat because it fails to grasp what the middle part of a story could and should do. When it came to Dace’s character and Arionna’s relationship with him, the stakes are raised for sure, but there needed to be more plot outside of this.

Read if: You liked the first book and trust the author is going to deliver on all the delicious mythology she’s setting up. It kind of reminds me of Robin McKinley’s Pegasus in that way; you like the story, even if the ending of the book is anti-climactic and pissed you off.

Beware if: You want pay-off on the mystery front. This is not the book in this series that’s going to do that for you.

Rating: I can’t state enough how I wanted to like this book more, but the ending killed it for me. Something else needed to happen; it was too much set-up and too little pay off. This isn’t the first series I’ve read that’s done this, and it ticks me off every time. Sequels are hard, I know, but book two is where the ugly, miserable parts of your characters and weird, complex world-building can really shine. I am going to finish this series, but 3 stars for dropping the ball on the climax.