The Hollow March by Chris Galford 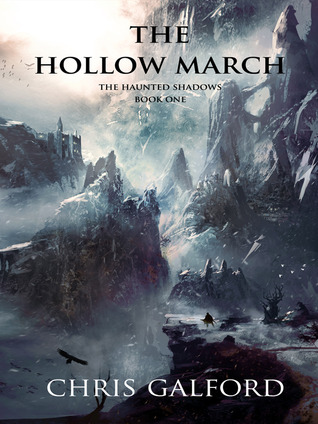 I picked up this book initially because the cover is seriously beautiful; it reminded me of the Alan Lee illustrations for The Lord of the Rings, which are the editions of that series I own. I was looking for a new epic fantasy that combined the high adventure elements of a travel quest with something new and different. The strength of The Fifth Vertex was in its characters, and it’s a book that does just this. This story, however, has all the setting of epic fantasy, but none of it feels grounded in the characters, and this kept destroying my reading experience.

As a reader, I better be able to tell what the main character(s) want, and the early, driving action in a story needs to bring that into lazer focus. This is, essentially, what the book is about: what the character wants or needs. The main problem in The Hollow March is that I kept struggling with what Rurik wanted. He wants to fight his father because of backstory, okay, but what else? This is also a story that could’ve benefited from only focusing on one character, too, because a single well-developed character can make a book, but a weak main character will only get their perspective diluted in a multi-POV story. Essa’s character rose above the rest, and maybe the story should’ve been about her, but trying to make the story about the band of sell-swords didn’t quite work, either. I didn’t hate any of the characters, but I just didn’t feel much of anything for them, which is much worse, honestly, than if I’d hated them. I’ve read books where I’ve spent the better part of the book loathing the main character, but I can hate them because there is something there to hate. It just doesn’t feel like there’s much behind Rurik & Co.

The other issues I had with this novel might’ve not occurred at all if I didn’t have such a lackluster experience with the characters. There’s a lot of telling about the backstory and the fantasy world, but in epic fantasy, the world building exposition tends to be heavier because it can be essential in helping the reader understand the story. There’s still a tad too much telling here for my liking; a bit more sticking to the action vs. explaining backstory could’ve done the first several chapters of this book a lot of favors. The story, in many ways, should’ve opened with Rurik or found a way to do so and make him interesting. I honestly think that’s often the way to know if an author has written the story about the wrong character–if they can’t find any interesting way to open said story with the main character. Are there exceptions to this? Yes, but they are highly exceptional, and those stories do have to work extra hard to convince me that the main character should be the protagonist. It takes a level of story-telling finesse that, not gonna lie, most authors (including moi) don’t have to successfully open a story without the main character any where in sight.

Backstory is never as interesting to the reader as it is to the writer. I love my character’s backstories and think they’re terribly important, but readers prefer the here-and-now, which can make it tough to get the necessary info into the story. Epic fantasy tends to just dump it in there, but even that’s not the specific problem I had here. It felt like the story was about the backstory and not about the current action; it’s just that the explanations about who did what never let up. The action got lost in all of that, and there simultaneously needed to be more action and less. It’s a confounding book, and a problem that I usually don’t find outside of fantasy books with literary aspirations, or at least, that’s where I’ve experienced this feeling before.

Read if: You have a lot of patience with characters.

Beware if: You wanted epic fantasy with a little more action.

My Rating: 2 because I just couldn’t get into the story. There’s a lot of explanation with much story, IMO.